Double bass. First played a bass guitar as a teenager when a group of school chums formed a band called The Mood. Always hankered after a double bass and finally bought my present instrument in my 20’s. It’s a German bass c1890 and I have played it as an acoustic for years, mainly for a group playing charity gigs. 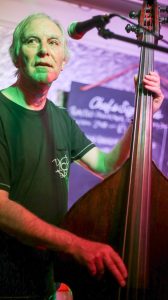 My musical listening ranges from blues through rock, folk and classical but if I’m honest I prefer to play rock and when the opportunity came to join a brand new band, rather than buying a bass guitar, I researched the possibility of amping up the DB.

Acoustic instruments present issues when choosing equipment but luckily for me a bass player called Phil Jones, also an electronic engineer, formed a company to improve the choice for bass players. I use a PJB Flightcase 150W  with 4 5″ speakers. For a pickup I’ve gone for David Gage The Realist acoustic transducer piezo pickup. Fun to fit as I had to remove the G string as the contact fits under the bridge foot and I’ve re-strung with Thomastic Spirocore strings. Also I bought a small bass guitar,  the diminutive but big sounding Kala U-Bass.

Am I loud enough to break thru Tim’s drumming and those two noisy guitarists?…NO! Next purchase is a PJB powered cabinet with build in amplifier 250W, 6×5″ speakers to add to the Flightcase.

Favourite bassists are too numerous to mention but early influences were Jack Bruce and Ray Brown and now the incredible Esperanza Spalding who gives the upright bass a new following. 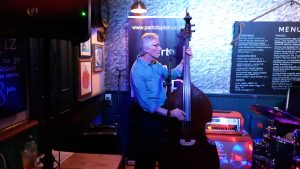