Been playing guitar since I was 16 and totally self-taught (that’ll explain a lot!).  Played the trumpet at school and had ‘proper’ lessons so can even read music a little.  Still have a trumpet too although I doubt it will be appearing at any of our gigs.

Played in various bands over the years mostly great fun but a few not.  Learned something from each one though.  Playing live is always a buzz even if the nerves are fizzing a bit to start with.  All part of it I guess.  Not a fan of recording although recording demos with POAP has been a laugh.
Owned various guitars over the years but mainstay has been a Japanese Fender Strat I bought in 1989.  It’s a bit of a ‘Triggers Broom’ as all but the body and neck have been replaced.  Been refretted twice and has jumbo frets on now which I love.  Latest acquisition is a Fender American Special Telecaster.  It’s perfect and does everything I ask of it and more.  A true workhorse!
This is now my main guitar with the Strat tuned to open G.

Amp wise I use a Peavey Valve King 2 through a 2 x 12 cab loaded with Celestion Vintage 30’s.

Talent boosters on the floor are a Custom Audio Dynamics Wah, Korg Polyphonic Tuner, Boss customised overdrive, EH phaser and EH Electric Mistress.  All good stuff.
Influences are too many to mention them all but range from Squeeze, Hendrix, ZZ Top, AC/DC, Dr Feelgood/Wilko Johnson, The Jam, The Police, The Who, Ian Dury etc etc.  Basically if I like it – I like it.  Doesn’t matter who created it.

I play mostly rhythm in POAP which is just as well as I’m not a great lead player.  I much prefer chugging away and providing a solid backup to Pauls noodling.  It’s all about teamwork. 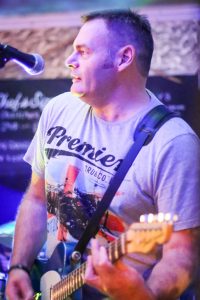