Otherwise known as the Gaffa due to his stroppy demeanour when things don’t go to plan and somebody plays a duff note. Of course Paul never plays a duff note or sings out of tune!…..yeah right!. 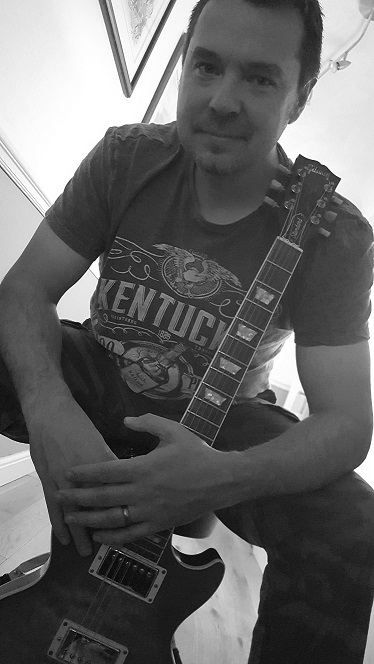 Been playing guitar now for 31 yrs (has it really been that long), and singing for a while too……………..Favorite guitarists are any off the Ozzy guitarists, Randy, Zakk, Jake, also Steve Vai, Nuno Bettencourt, Stevie Ray Vaughn, and many more. I like most rock bands, but AC/DC is my stand out band for their ‘stick to what you know’ philosophy.

My real passion is for the guitar rather than the vocals, but the rest of the band bullied me into singing for ‘Part of a Plan’. Gear wise, I’m a big fan of ‘keep it simple’, although I am a self-confessed gear junkie when it comes to amps and guitars. That said, I do have an ‘old faithful’ in my 96 Gibson Les Paul, that is and always will be my favorite guitar. Also, have a couple of Strats, and a PRS that I mainly use for gigs, and a Gretsch power Jet.

Amp wise, I do tend to chop and change, but have settled (at the moment) on an Orange Rockerverb head with EL34’s and an Orange 2×12 cab (with Vintage 30’s). It’s a simplistic amp that just sounds great, the down side is they are BLOODY heavy. for the pedals it’s just a Wah, a boost (this pedal seems to change on a monthly basis!) and a Flanger …..That’s it!. In 2018 I also converted to a wireless system, that allows me a bit of free movement and more importantly means I no longer get tangled up in my own cable.

For the PA, we use Mackie Active speakers and a Soundcraft mixer which copes well with the stuff we do. Typically we run the vocals and a tad of bass and guitars through the PA.

Other interests include building cars (yes, real ones) and rugby. Two kids (which is of course the biggest challenge) and one very understanding wife.

I enjoy talking to people about music and guitars / amps / etc, so if you are at one of our gigs feel free to grab me for a chat (as long as you’re not a nutter of course). 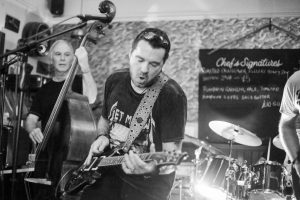